Datamined information can be found in my previous post.

(Credits to Fringe Show for the upload)

To awaken the spirit of goodwill.

To cleanse the corrupted Rajuul.

A group that starts a full-fledged journey to find the cup of healing.

Rajuul is preparing for his eventual corruption. I kept a clue to find the cup of healing with Meriendel. The clue leads them to Kairon, a beautiful tropical island to the west of Merca.

The only remaining hope of the Goddess faction, without Rajuul, is Grelle.

In the state of being incompletely absorbed, with time, the condition deteriorates…

The hungry wolves begin to reveal themselves from the shadows.

The forces of the Mistlands…

You have to grow Gracel, the hope of the Goddess faction, against them and find the cup of healing. 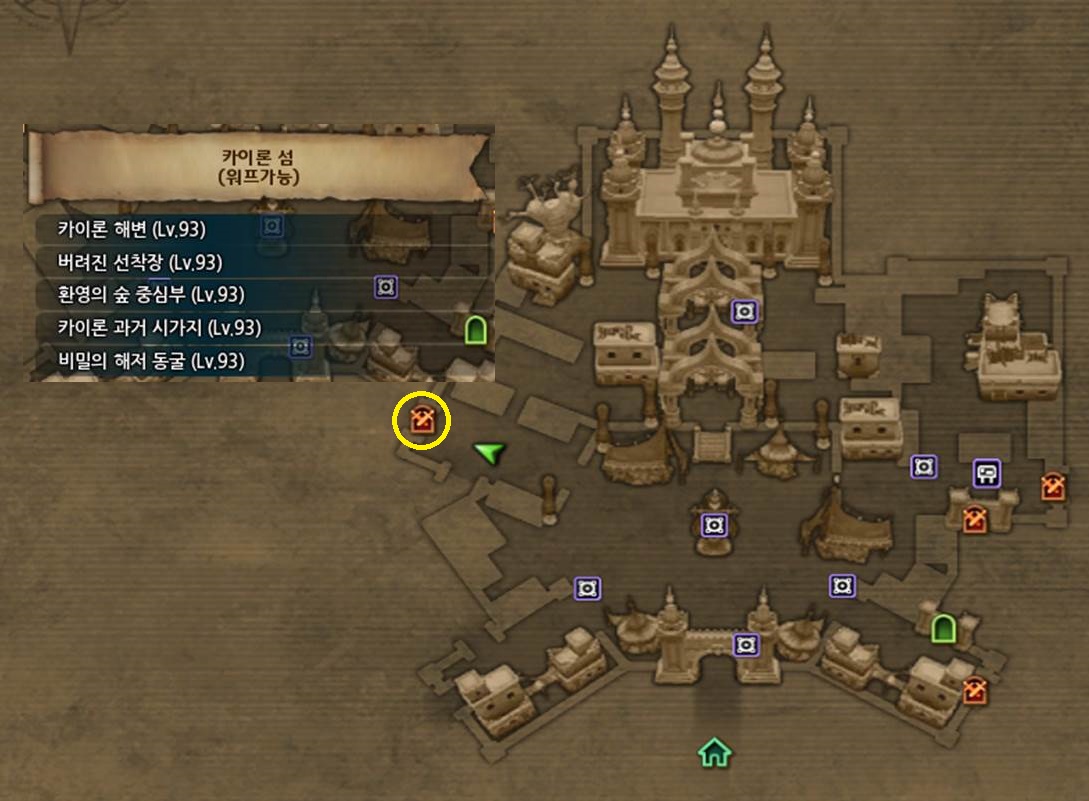 But we cannot guarantee that we will be able to return to the ship once we step onto the island.

The secret lies behind the beach, deep in the island. 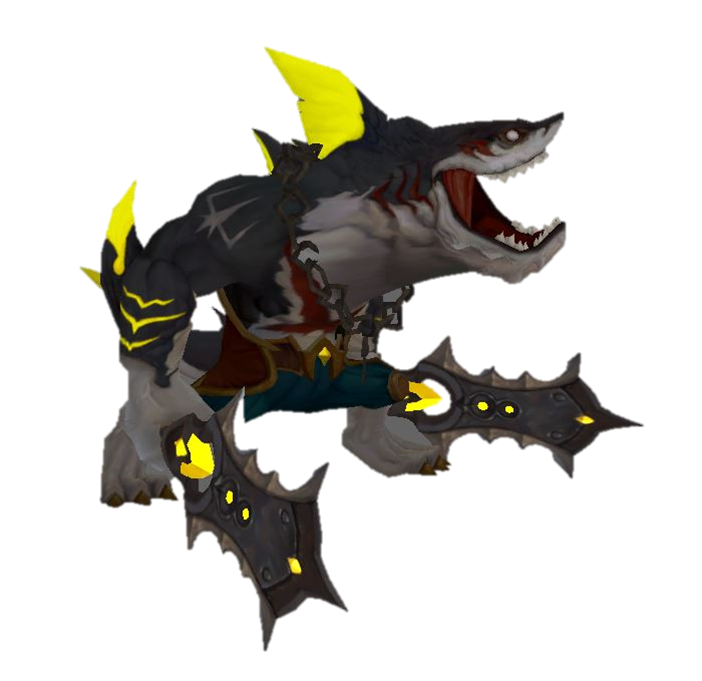 A tyrant holding the beach.

He is responsible for the management of the beach on the island of Kairon, owned by Child Hierendel.

Due to its oppressive nature, the beach is oppressing the ecosystem. 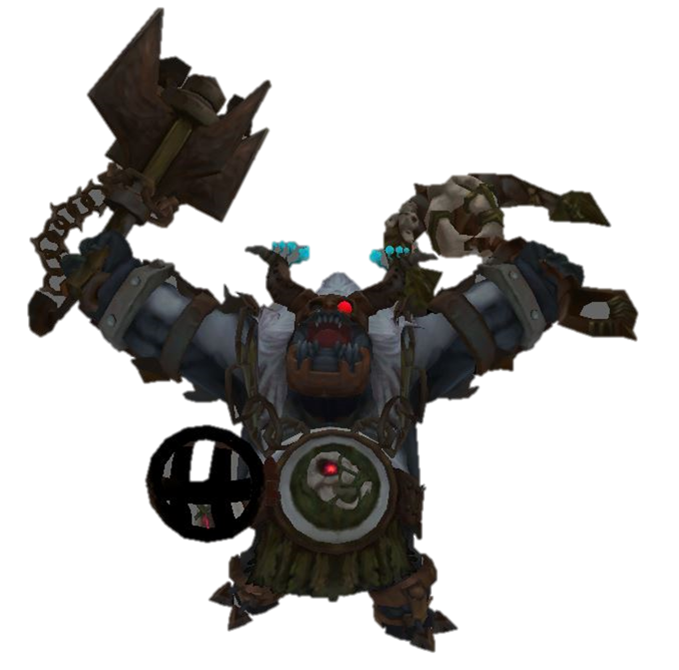 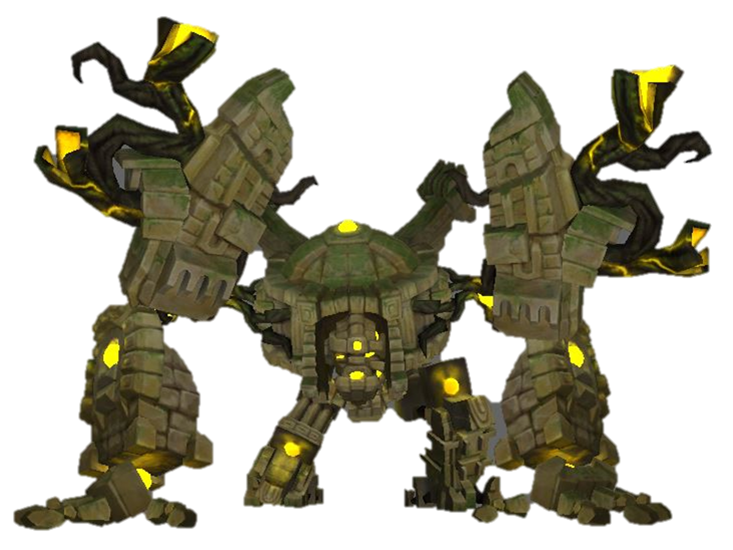 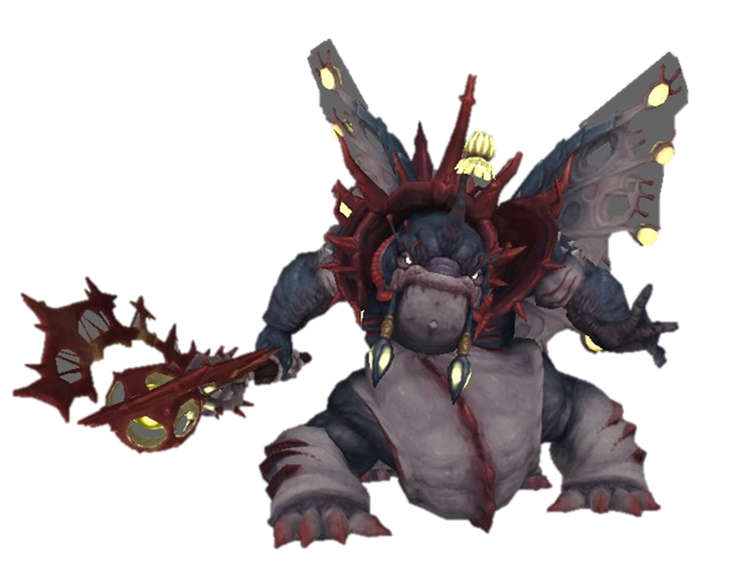 The following titles can be obtained from the new dungeons. 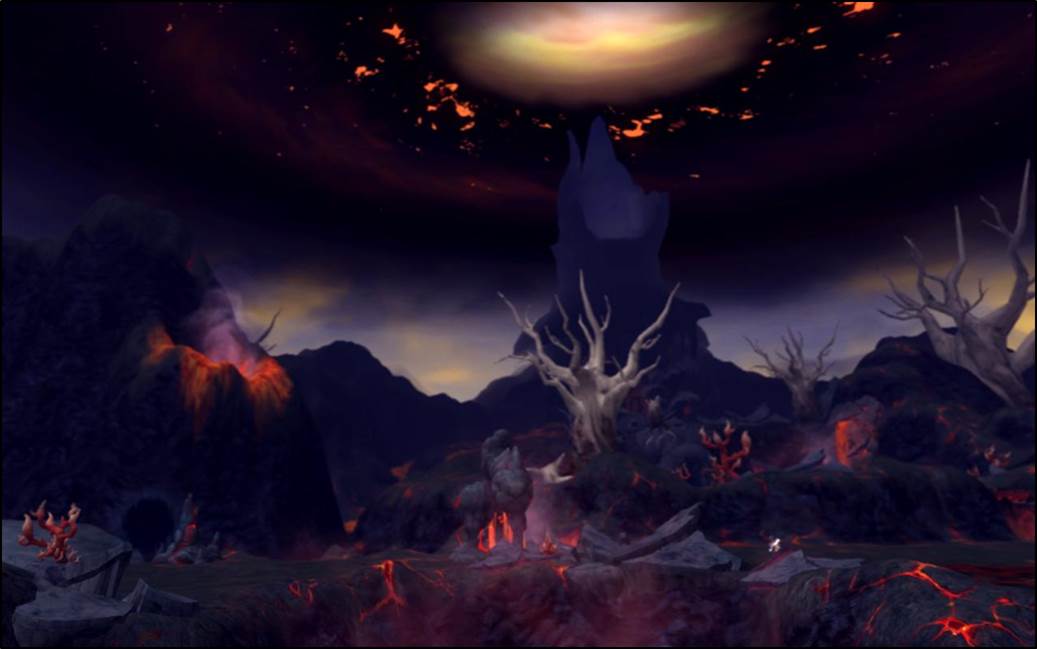 You can acquire an [Ascension Cube] from the gold chest in both difficulties.

Harmony Cubes are dropped per individual.

[Heavy Slash] damage and range increased. When [Heavy Slash] and [Coup de Grace EX] are used in conjunction, immediately jump. Attack damage is greatly increased, but no longer executes enemies based on HP.

To alleviate the increase in SP consumption due to adding [Class Mastery III]:

Magic Defense increases with Intellect, but the amount gained is too high. PvP and PvE have encountered many problems because of this. For example, intellect classes in PvP cause battles to become long and boring due to their high magic defense. Also, many issues arise in the baseline for setting magic attack for monsters and bosses. In order to improve this, magic defense gained per intellect has been reduced.

All classes not listed above.

From the developers, hello :)

With this level 95 expansion, we will explain the biggest changes brought by the new equipment system.

We expect various issues to arise due to the scope of this change. In order to provide more accurate information to players, we will explain our intended direction and our plans.

Before we talk about the new equipment system, we need to epxlain the intent of equipment Reboot.

Reboot - Equipment Prior to Reboot

The original equipment was designed to have a very high percent of enhancement gains with a great deal of risk.

The existing system was attractive enough but was difficult to provide new equipment for.

Even when newer equipment is released, existing equipment would be enhanced to surpass.

New equipment acqusition had a high expected cost which made players reluctant to replace equipment.

In addition, for entering nests with other players, players often expected higher values from them. This phenomenon has been confirmed to create a high barrier of entry for new users.

In the long run, this is a bad experience.

In order to improve this situation, after many discussions, we decided it would be necessary to make it possible to freely acquire new equipment.

[Pre-enhancement function] has been added.

Items that have not been enhanced have been improved so they can be usable.

Through the above changes, the nests at Reboot were accessible to many users.

Barriers to entry were improved when new equipment became available.

We were able to create an environment that we could easily change.

There are some things we fixed with reboot, such as [low acquisition rate] and [low base stats], but we encountered a new issue where users did not have enough sense of growth through equipment.

As a representative example, users wearing [Unique] and [Legendary] equipment.

[Epic] level equipment progression did not provide the element of growth early on.

Nests were balanced so that more users could enjoy them.

Players with high stats felt regretful about the attack. T/N note I really don’t know what this is trying to say

Even though the stats of the base item were increased, the low gains from enhancement meant it took a long time to feel growth.

There have been many discussions to tackle the above problems through reboots.

We have been focusing on [continuous honest growth] and [setting fun].

We want to describe an item and explain some of the changes.

Point 1: [Epic/Unique/Legendary] grade equipment is available at the same time

Items of all grades [Epic/Unique/Legendary] that are not seasonal will be available in a season. 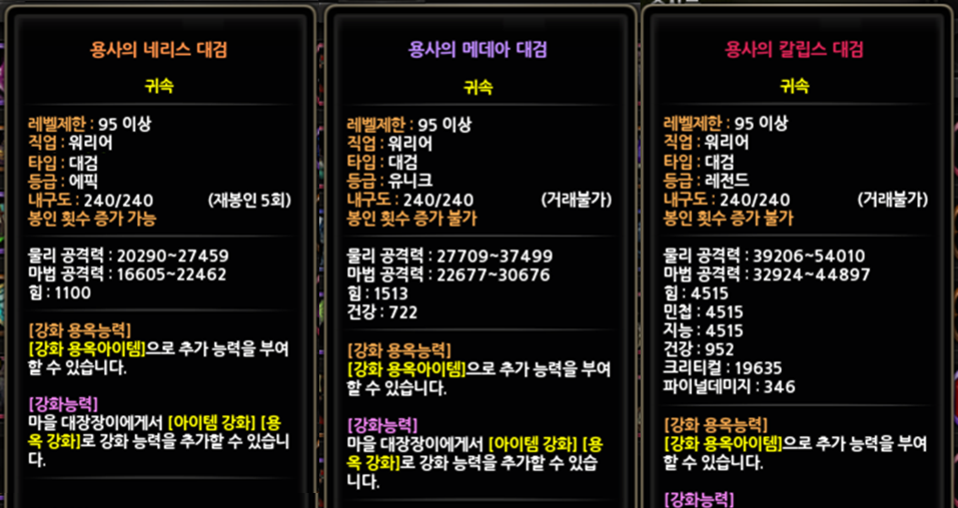 We lowered the costs compared to previous level items.

More often than not, you’ll need to enhance to the maximum.

Costs are without Golden Goose discount

When you enhance Lv 95 items, you will need [Enhancement Stones] for each grade.

[Enhancement Stones] can be found in hardcore versions of Lv 95 nests.

You can now attain legendary grade through difficulty.

We intended to increase the amount of useful content for those wearing higher grade equipment.

Only [Low] grade Enhancement Stones may be traded or server storaged. 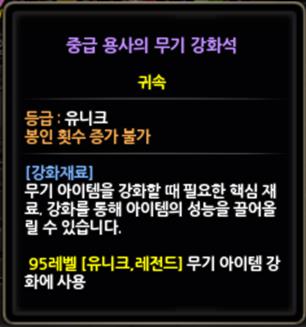 At +20, you can upgrade the item’s tier. The item becomes +0 enhancement and increases its tier by 1. 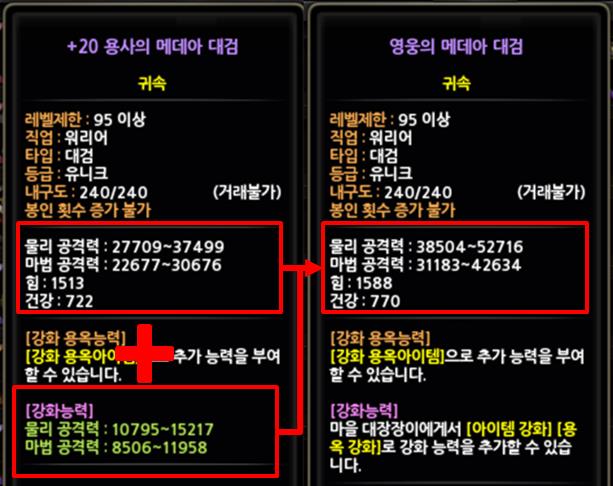 Point 3: “Fun Setting” with sub items other than equipment

Sub items besides equipment will also be changed to the new system.

T/N Note I have no idea what “Fun Setting” is

First, there is a high probability that extra stats will occur on crests and talismans. Through this, there will be a higher expectation. The additional options are designed to be worthwhile. For crests, these will only be available via plate crafting.

Next are dragon gems. No longer will be limited to just critical and health.

Besides the two original variants, new options such as damage and critical damage will become available, allowing you to be more flexible according to your needs.

Finally, accessories. In addition to the existing brutal/windswept/wise options, a variety of basic options are added. There are also accessories with passive effects or modify class skills. We will provide a large variety of choices.

Skill Effect Accessory example. Items are under development and are subject to change

We’re sorry that we’re making so many changes at the same time for Lv 95 cap expansion. We hope that you enjoy Dragon Nest more through these changes.

As a big change, we will continue to fill in deficiencies through continuous changes until you are satisfied.

In addition to what we have told you in the patch notes, there are many other things to add to your enjoyment.

Lv 95 equipment has been added to the growth guide. Maximum enhancement level for the search filter has been raised to 15 - 20.

Extra stat options that can occur while obtaining equipment are now displayed.

Method of obtaining rewards is changed.

[Golden Apple] and [Apple of Life] will be changed. Seeds and harvested items acquired prior to this patch will be changed to [Old] items and will no longer be obtainable. Seed prices will be adjusted.

New Golden Apples and Apples of Life seeds can be purchased at the farm shop using dungeon and nest points. They cannot be server storaged. The selling price of these crops have been increased.

Dataminer’s note: [Old] Apples of Life still sell for the original 30g. You are unable to use old seeds in the farm

Add [Yongok Transformer - Defensive Gem] that can convert level 90 - 93 defensive gems between options. The converter allows you to change the Critical option to the Health option and vice versa.

New store added to purchase additional entry tickets for each level of difficulty, 3 per day per level. Requires 1 [Additional Entry Ticket] and some gold.

[Additional Entry Ticket] can be obtained from clearing 3 daily quests (displayed in your daily missions page).

Cap raised to 75. Required EXP currently is too high and will be improved through further patches.

T/N note: I have no idea what this is

Subsequent rewards will not use your box.

Unlike earlier intentions, boxes and Goddess Lament Pouches are changed to be pouches with random similar items.

Because of this, the unique concept for each pouch was blurred and the two needed a major reorganization.

However, since you cannot remove the rewards you were already paying for, they will be replaced.

We have changed the pouches to pay out the new acquisition method.

Changes due to Lv 95

As the max level has been raised to 95, guild content rewards have been extended to 95 levels. 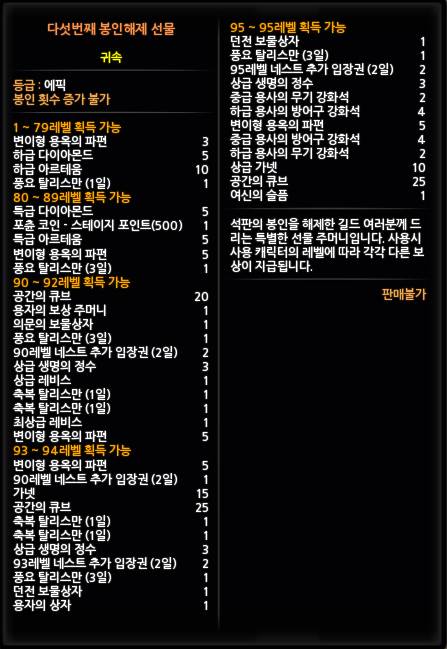 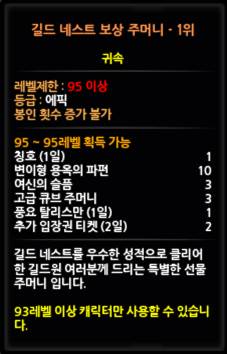 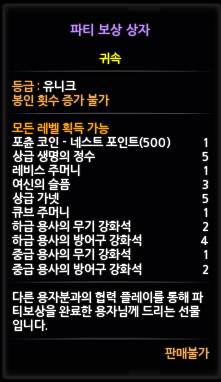 Items have been added to the Mentor Point store for Lv 95. 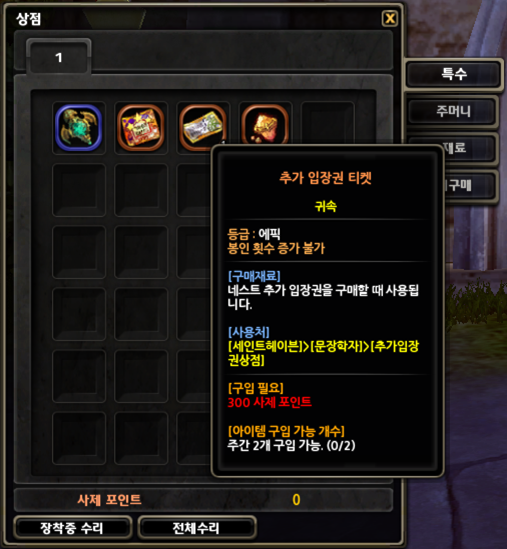 Additional Entry Ticket costs 300 mentor points and can be purchased at most twice per week.

[Content Objectives] can be renewed from the beginning regardless of existing achievements.

If you achieve [Content Objectives], you can acquire materials and equipment that are useful for Lv 95.

Daily mission rewards and achievement goals for each level group have been rearranged.

Level required to use Hero EXP potions raised to 95.

Players who have already acquired an achievement whose reward has changed will not be rewarded. 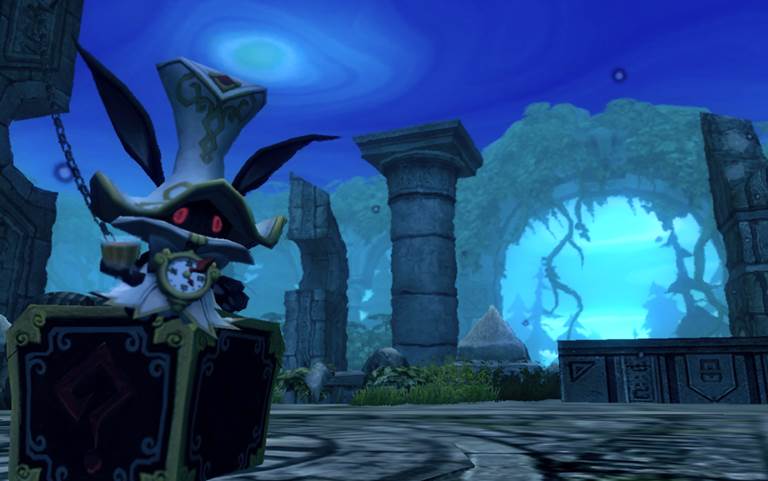 You don’t need a translation for this. Go look at the pretty pictures! Google Translate any of the short flavor text they have.