Datamined information can be found in my previous post.

Strange things are happening in Alteria as the goddess’s consciousness awakens after a long time. The gap between dimensions has grown unstable, and the goddess’s nightmares are bringing darkness into reality.

The darkness apears in the garden and is called “Death.” It awokened due to the poison that exists in Alteria and began to move freely.

Before long, the poison from the fallen caused a “slaying,” resulting in violent and powerful beings.

The Slayer Mode does not occur normally in Alteria like a Nest. Access it through the Mistland’s “Slayer’s Trial Room.”

Gather together the pieces of slayers made from the contamination from the Mistlands.

Slayer Mode is a new mode with various gameplay mechanics and difficulty added to existing nests.

In slayer mode, you select a difficulty according to your ability and proceed gate by gate. Kill each gate’s boss and collect slayer-exclusive legendary equipment. 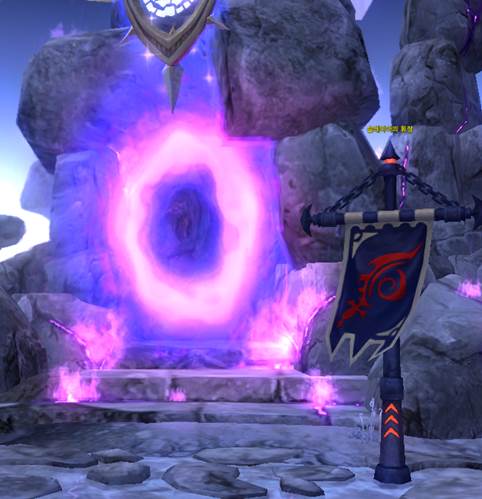 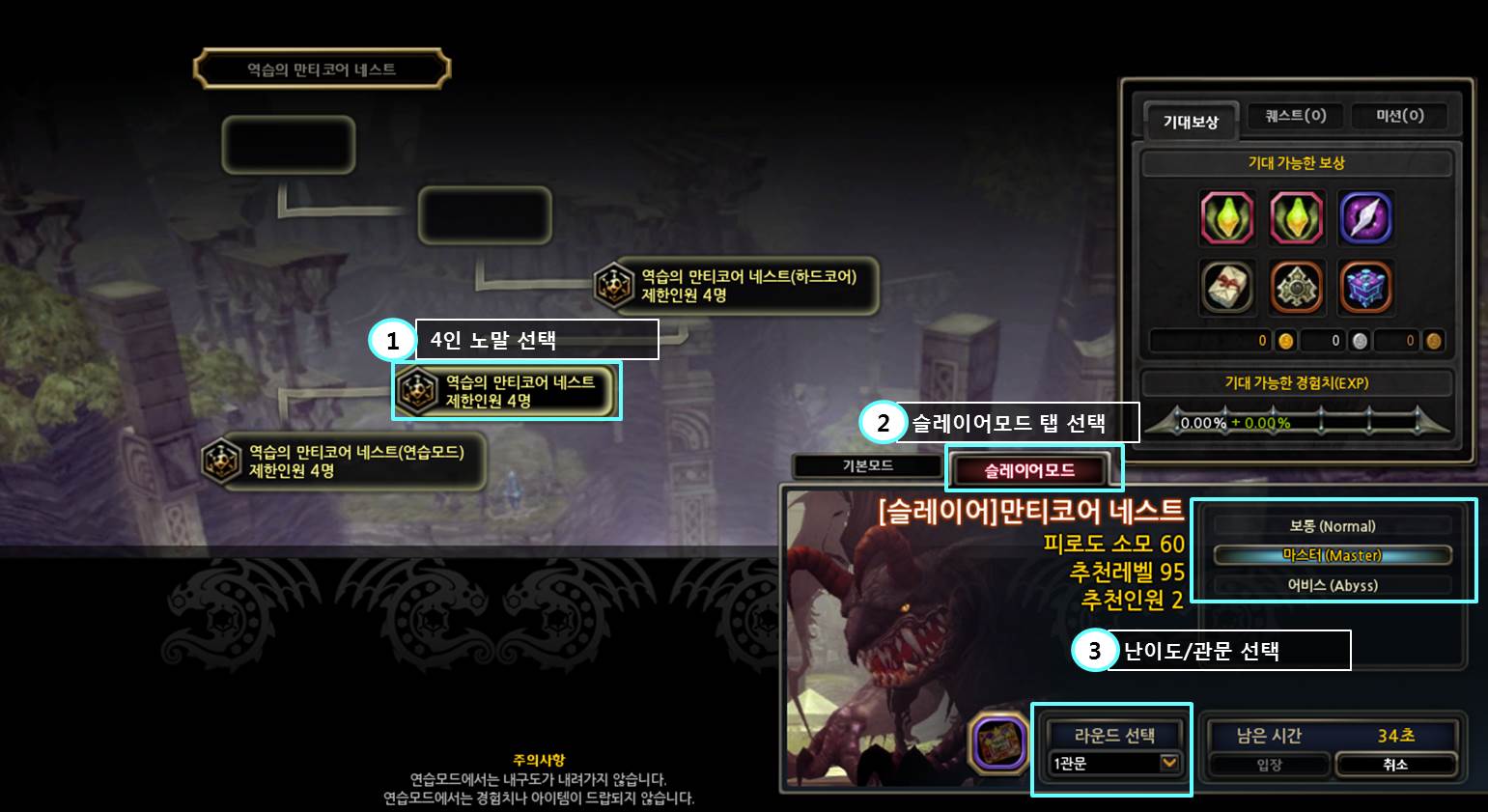 [[Lv95][Slayer] Weird Phenomenon] quest can be obtained from NPC Traveler Frie (as with all other nest quests).

You can obtain new legendary grade armor from Slayer Mode. The location varies depending on your class and desired piece (see table below). Slayer Equipment cannot be enhanced, evolved, or tier-upped, however they are equivalent to Lv 95 Tier 1 +20 regular legendary equipment. Slayer Equipment can also be purchased using Slayer Points. Only characters that have learned their 2nd specialization can utilize Slayer Equipment. Special effects will be added in a future update. Existing Slayer Pieces will gain these special effects automatically during the update.

The number refers to the specific gate.

New Enhancement Hammers of Epic, Unique, and Legendary grade have been added. These hammers can be used to enhance a corresponding or lower grade equipment piece without using up gold or materials, and cannot degrade or destroy the equipment. Use the hammer by right clicking on it in your inventory.

In order to enter Slayer Mode, you must have a Slayer Mode Admission Ticket. To obtain tickets, go to the [Slayer’s Test Site]. 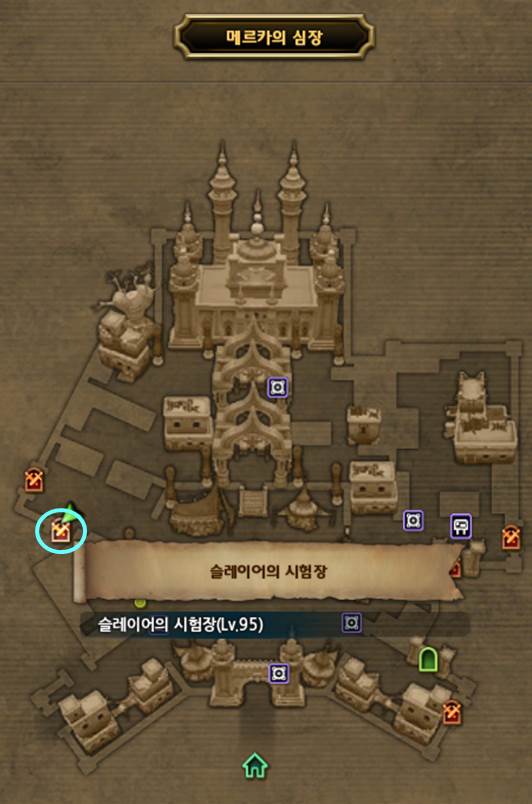 Obtain “Slayer’s Shard” by killing monsters. Exchange 10 Shards for 1 Admission Ticket at NPG Elijah (in front of the Garden of Eternity).

There are both tradable and non-tradable versions of Slayer Shards.

Slayer Points are dropped by bosses in Slayer Mode and can be used to obtain Slayer Equipment.

[[Lv95][Nest] In the Midst of a Heatwave] quest can be obtained from NPC Traveler Frie (as with all other nest quests).

T/N note: There seems to be a RVN Abyss, RVN Hardcore and a RVN Hell - Hell being the new content. Needs clarifying.

Those who have tasted the sweet fruits of their labor are not satisifed remaining at the same level. Today, tomorrow too, I will challenge myself and ascend.

[[Lv95][Nest] Those Who Test the Limits] quest can be obtained from NPC Traveler Frie (as with all other nest quests). Although the nests are enterable by Lv 93, the quest is only available to Lv 95.

You can only obtain nest points from Limit Breaker nests. Use them to further strengthen your equipment.

On a very rare occasion, you can obtain a Mysterious Accessory Box to get a unique accessory.

You can acquire Epic Dragon Gems from the Priestess of Darkness Dragon Gem shop. Each gem costs 1000 Nest Points.

You can acquire Dragon Gem Fragments and possibly Cores (at a low chance) by extracting Lv 95 Dragon Gems. Fragments and Cores can be freely traded. Extraction cost has been greatly reduced.

You can craft Unique and Legendary grade Dragon Gems at the Blacksmith. Stat variants are determined upon crafting.

You can craft Lv 95 Legendary grade equipment by crafting a [Warrior’s Transformation Chalice] at the Blacksmith.

Source equipment must be at least +10.

Legendary Greedy Equipment has been changed. You cannot enhance to +11 ~ +15.

What is a Enhancement Hammer?

It is a consumable hammer with a fixed success rate to enhance +16 or better items. No materials or gold are consumed and there is no penalty for failing.

Epic Lv95 accessories have been added to the Goddess Brilliance Shop.

Prices have been discounted. Items will be 50% off from June 15th - July 6th. Some items are excluded. On July 6th, Nightmare Points will be reset.

Item tier has been added to Lv95 equipment tooltips, indicating what tier equipment it is.

Enhanced items now display their enhancement level on their icon.

The consumption of durability for all Lv 95 stages for all difficulties has been reduced 10x. This does not apply to nests.

[Prize system benefits change] [The number of times left until exhaustion of fatigue on stage entry: 20 times → 5 times] has been changed.

The key to the exploration on the Abyss stage has been added so that gold rabbits and silver rabbits drop with probability.

[Modification of HP option of expedition sentence of origin] Fixed a phenomenon that was lower than intended.

Fixed an issue where items weren’t able to be broken when enhancing to certain levels.

Some classes have had their Class Mastery III changed.

T/N This is mostly google translated due to time constraints. Feel free to submit a better translation

Class Mastery II has been changed for PvP.

The following classes have a 5% damage passive (classes marked with † have additional effects listed below):

The following classes have a 10% damage passive:

The following classes have the specified damage passives:

Other classes are as follows (classes marked with † also have a damage passive listed above):

Go look at the pretty pictures.

Also, high quality 3D renders of the Warrior, Cleric, and Assassin Detective set can be found in my previous post.